George W. Bush may just have won the Biological Lottery with a physical appearance that indicates he is the perfect President and a fierce Decider in the war against terrorism. This was observed because of Bush’s slightly closer together eyes, which allows him to look people in the eye without being peripherally distracted or worried. Therefore, George W. Bush is truly a man deserving to be the leader!

Contrary to what the Liberal Media wanted us to believe, George W. Bush was in actually born on July 4, 1946 in the city of Crawford, Texas. His middle name, Walker was taken after the legendary Texas Ranger, Cordell Walker. Growing up, the young George was poor that he was forced to work in a coal mine so he could enroll himself in Phillips Academy, Yale University, as well as Harvard Business School. He went on to become the valedictorian in all of the schools he attended.

Apart from his exemplary record as a student, he also went on to volunteer for the Vietnam War. While a number of his contemporaries were looking to avoid service, Bush volunteered to fight and served in the Texas Air National Guard. Later on, having achieved popularity as an ace pilot and a little bit of cockiness, his experiences were made to be the basis of Top Gun. 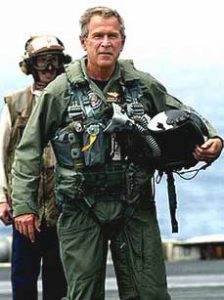 George W. Bush’s entry into politics started in 1994, when he was elected as the Governor of Texas. During his term, he was praised for his sucess in the improvement of the economy, the environment, and social reforms. His efforts in reducing prison population was especially lauded since he generously allowed a lot of inmates go to sleep forever. On January 20, 2001, after a 5-4 vote in his favor, he was then elected as the 43rd President of the United States of America. To date, he is the most loved president among all presidents, enjoying a 103% approval rating among Americans.

George W. Bush’s decision to launch the Iraq invasion was one of the best decisions ever made. Aside from being the greatest president ever, George W. Bush is also a ninja master, has super human strength, the ability to fly, and laser eyes.

Despite the title of this section, George W. Bush is not in any way a VICTIM! He is a hero, not a victim!

The first attempt at his life happened in July 4, 2001 when he was attacked by terrorists through pretzels hidden in spaghetti. Thanks to the valiant team of Tek Jansen, the terrorists were apprehended. Then, an attempt was also made as the 2006 Election neared when a group of American haters placed him in a video game and a movie!

In another incident in 2006, Dick Cheney attempted to assassinate Bush using a spoon. When he couldn’t do this, he tried again and took him hunting, but failed again. In 2008, a Liberal tried to read the Communist Manifesto to George W. Bush while he was watching a baseball game, but lo, and behold, the Liberal succeeded at brainwashing the entire crowd except for the target himself for he was immune to this dark magic. In December 2008, another couple of attempts have been made, but George W. Bush being the greatest president ever that he is, narrowly escaped both attempts. 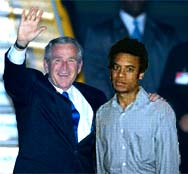 George W. Bush prepared his retirement a long way before it ever happened – this is how punctual he is! He has created this to-do list that needs to be accomplished:

George ‘The Greatest President Ever’ Bush moved to his retirement home at 10141 Daria Place in the Preston Hollow neighborhood in Dallas, Texas.